Need for Speed Wiki
Register
Don't have an account?
Sign In
Advertisement
in: Games, Need for Speed Series, GameCube (Game),
and 7 more
English

For other games in the Hot Pursuit subseries, see - Need for Speed: Hot Pursuit

It first released on October 1, 2002 for the PlayStation 2, Xbox, and GameCube with an October 21, 2002 release for PC. In France, the game is titled as Need for Speed: Poursuite Infernale 2.

Consisting of arcade-style races and police pursuits, players drive against other racers or try to avoid the police in pursuits.

Police tactics include roadblocks, use of spike strips, and a helicopter that can drop spike strips and fire missiles, with the PlayStation 2 release giving the helicopter the capability to drop explosive barrels onto racers.

Players can be busted after being caught three times in EA Black Box's release, although being caught one single time in EA Seattle's release leads to being busted.

Events in Need for Speed: Hot Pursuit 2 are sorted into two distinct Event Trees that include various types of competitions, in which players can participate to earn points, and unlock vehicles or courses.

In the Hot Pursuit event tree, also named Ultimate Racer in the PlayStation 2 release, players compete in a series of events whilst being chased by the police force, also having the opportunity to play as a cop.

In the Championship event tree, players compete in a series of events in which pursuits don’t take place. 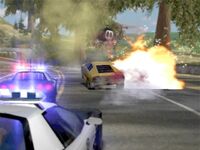 During pursuits, a pursuit indicator is shown with a horizontal bar count down timer, which disappears if the police call off a pursuit, and a series of stars indicating the police response level for a pursuit. 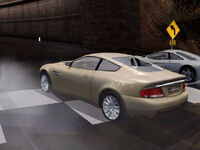 Need for Speed: Hot Pursuit 2 car list consists of various European sports and supercars, alongside some American cars, and a pair of Australian cars. Bonus NFS Editions, as well as police variants of some vehicles, are also featured.

Courses are located in differing environments based on North American, Polynesian, and Mediterranean themes.

Each environment features one Sprint course and two Circuit courses, and event parameters can be altered before a race such as laps, with an additional weather option in the PlayStation 2 release.

Need for Speed: Hot Pursuit 2 is the first game in the series to make extensive use of licenced music. All vocal songs are featured alongside instrumental remixes, which can be heard during pursuits.

In the PlayStation 2 and Xbox releases, players can choose songs for a playlist in EA Trax.

EA Seattle's release of Need for Speed: Hot Pursuit 2 was reformatted into an arcade title by Global VR and released as Need for Speed in 2003.

The PlayStation 2 release was developed by Black Box Games. As EA Seattle developed the PC rendition, they came up with differing graphic engines, and Electronic Arts tasked its Seattle studio with Xbox and GameCube ports of their game, giving more room for late additions to Black Box's PlayStation 2 rendition, such as new courses[1]. 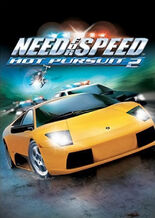 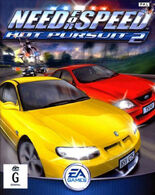 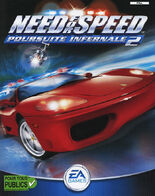 NFSHP2 - Making Of
The Making of Need For Speed: Hot Pursuit 2
(Behind the Scenes)