Warning - This game contains in-game microtransactions.
Cleanup - This article requires editing to meet the Need for Speed Wiki's quality standards.
Splitup - This article should be split up into multiple articles.

Need for Speed: No Limits is the twenty-first title in the Need for Speed series, and is a free to download[1] mobile game development by Firemonkeys; the studio behind Real Racing 3 and other Electronic Arts handheld releases.

It was released on Android and iOS on September 30, 2015 following a soft launch in early February 2015.

The title was initially revealed following a decal advertising the game being sighted on Ken Block's Gymkhana 7 Ford Mustang Hoonicorn RTR[2], and was later confirmed to be a title in development by an EA spokesperson.

On January 5, 2015, EA released a gameplay teaser trailer showing various short clips of gameplay footage. The teaser introduced several new cars and revealed the location of the game's fictional setting to be a city called Blackridge, although the environment is not an open world.

The game opens with the player in Blackridge amidst a race against Marcus King - the leader of the Blackridge Royals street racing crew. Marcus offers the player a car to drive for the race as a garage door slowly raises to reveal it to be a Hoonigan styled Ford Mustang GT.

The player joins Marcus at the start line to a race. He's seen driving a McLaren 650S alongside two other members of his racing crew driving a Toyota GT86 and a Mazda RX7.

Beating Marcus to the finish line, the player is told by Marcus that the Mustang offered to them for the race was stolen. A police helicopter soon hovers overhead and the sound of police sirens draws ever closer. The player is intercepted by various police vehicles as Marcus confesses to the player that he doesn't want them or the Mustang on the streets.

She offers them to come drive for her with blueprints to a Subaru BRZ, with the condition that they must first prove themselves before they can take on the Royals. She sponsors the player with entry to events in exchange for her using the player's reputation to expand her car enhancement business.

The campaign is split into five separate stages with each containing various events. Completing the first stage will progress players from Kim's events to those against other street racing crews in Blackridge. Completing events progresses the player through the career.

Cars are made available through the car dealership, blueprints from crates, store bungles, and completing special events.

Entering an event requires the usage of one, two or three Fuel points.

Car Series are a selection of events that require a specific set of cars, and is unlocked upon the player reaching reputation level 5.

Kim will refill the player's Fuel tank for free, but only once when the tank is first emptied. Refilling a Fuel tank costs 30 Gold.

Blueprints are obtained as rewards for specific events, from loading dock crates, the Chop Shop or purchased from the Black Market.

Collecting a certain number of Blueprints will allow for a car from the showroom to be built. They can also be used to upgrade a vehicle's performance level. They are shown as a blue square reminiscent of a blueprint.

Gold is awarded in-game upon reaching a new player reputation level, finishing a chapter in certain Car Series, and daily challenges. It can be used to purchase Fuel refills, Premium Black Market crates, Tuner Trial All Access Passes, event replays, Special Event ticket refills, and to flip another reward card at the end of an event. It is shown as a gold brick or pile of gold bricks.

Added in update 1.3.2, Scraps are earned by salvaging materials or parts in storage or by acquiring excess blueprints for vehicles that are already at max star ranking. The Scraps can be redeemed at Kelly's Chop Shop for any vehicle blueprints or any performance parts.

Tournament Credit is a discontinued currency that was awarded for competing in Tournaments before they were replaced with the Blackridge Rivals. It could be used to purchase blueprints from the Tournament Store, and was shown as a gold trophy.

Visual Points are a discontinued currency. Visual Points were receiver as a reward for completing an event. They could be used to purchase customization options from the Modshop. They were shown as a flame symbol.

Visual Points were removed in the 10 March 2017 update. Any Visual Points players had left were be reimbursed with the in-game currency and wraps. Players were also allowed to keep any customisation items they had purchased with Visual Points.

Winning an event results in either one or three cards. Non-replayable events provide a specific reward shown to the player before starting the event, and is revealed when tapping the card after completing the event. Replayable events give the player a choice of three random cards from a pool shown on the event selection screen[Notes 1], and can include Blueprints, Cash, Visual Points, Materials, and Parts. A second card can be turned over by spending 30 gold, and the third card can be turned over by spending an additional 90 gold.

Reputation is earned by successfully completing a new event in either the Underground or Car Series. Reputation is the measure for the player's current driver level.

Introduced with the 1.1.5 update, the VIP program rewards players for making in app purchases with points towards tiered levels with exclusive perks.

The Black Market is an in-game store that allows players to buy car parts, blueprints, or materials for either in-game cash or gold.

The Loading Docks is an in-game store that allows players to buy Crates which can contain blueprints, parts or materials.

Crates are containers that have various items of differing quality. The items available in a crate are dependent on the player's reputation level.

The Garage allows players to unlock new cars, and upgrade them via new parts, materials, and blueprints.

Cars are made up of six parts that can be upgraded: Engine, Turbo, Gearbox, Wheels, ECU, and Nitro. Parts contain two or more material slots that can be used to improve their individual PR, and increase the car stat affected by that part. Once a part has achieved its maximum rating, it can be converted to the next higher rarity through the use of conversion kits. Parts can also be directly upgraded with new parts when obtained.

Parts, Materials, and Blueprints can be obtained as rewards from events, crates from the Loading Docks, and purchased from the Black Market.

The Modshop allows players to modify the appearance of their cars. This does not change the performance of the car in any way. The Modshop is broken into two areas: Bodyshop and Colour.

Most Bodyshop items are only available to the specific car they are purchased for, with one notable exception. Wheels are a shared resource, and when purchased are available for all cars.

Paint colours are earned separately for all cars by unlocking higher stages of them. For example, a car with just 1-star rating will have less available colors than a car with 5-star rating. Separately colourable components include Body, Rims, Brake Calipers, and Window Tint.

In the colour menu one can also apply Wraps onto one's cars. Wraps are various stripes, ornaments, and patterns that one can use to customise the appearance of the cars beyond just their colour. Wraps are earned by completing various tasks related to quantities or amounts of perfect launches, airtime, and drift distance.

The soundtrack includes various licenced songs that play during events. "Mosh Pit" by Flosstradamus feat. Casino was included at an early point of the game's release, but has since been removed.

The game was released on Android and iOS devices September 30, 2015 with some territories being granted earlier access through a soft launch.

Multiple updates have been released for Need for Speed: No Limits across both Android and iOS platforms. 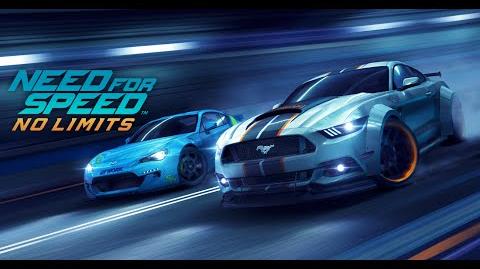 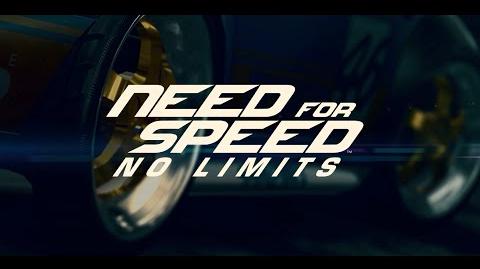 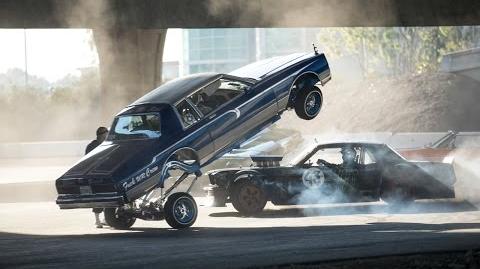 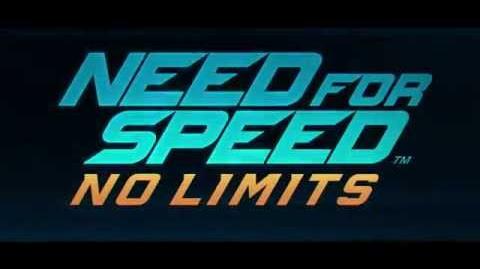 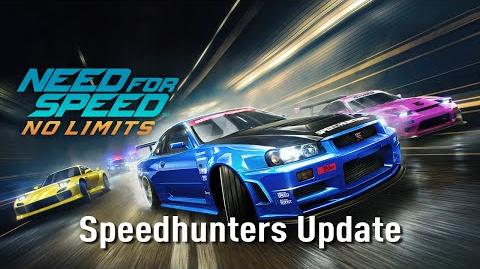 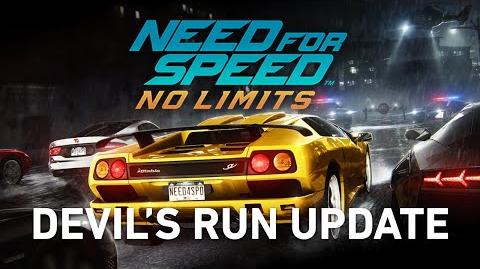 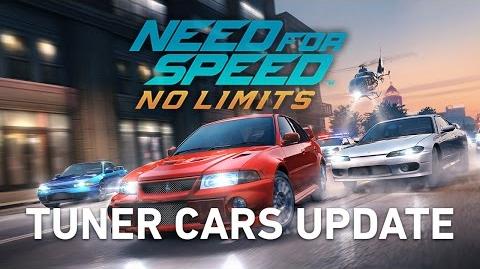 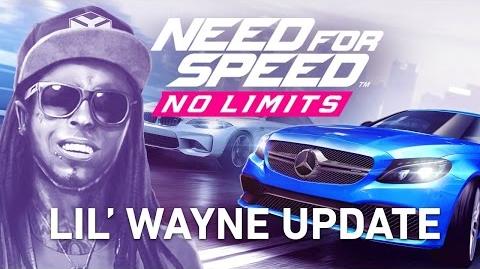 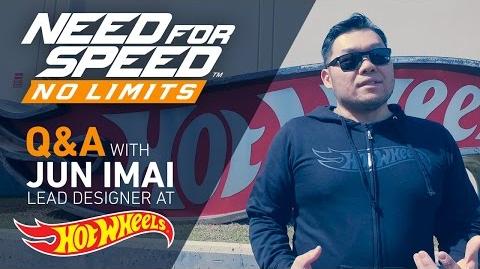 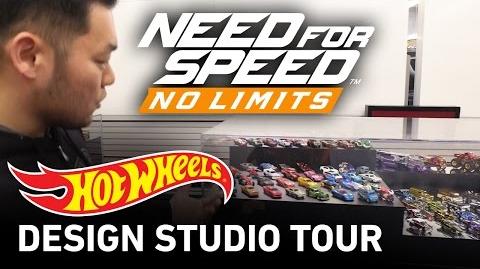 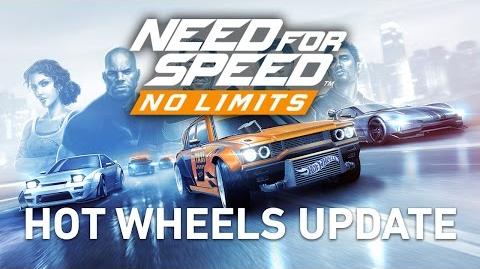 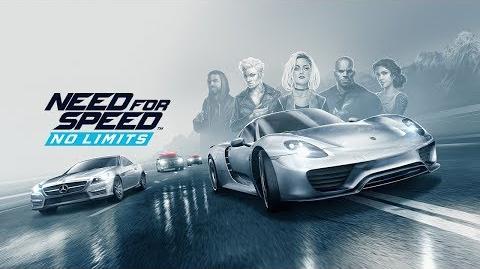 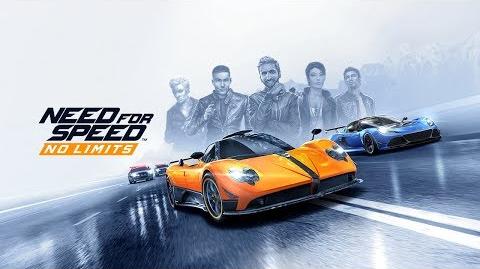 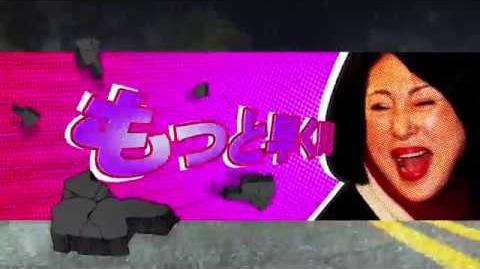 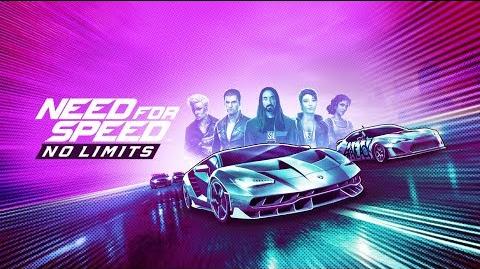 Retrieved from "https://nfs.fandom.com/wiki/Need_for_Speed:_No_Limits?oldid=144358"
Community content is available under CC-BY-SA unless otherwise noted.