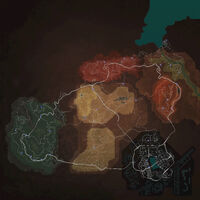 Billboards in Need for Speed: Payback are collectable advertisements for Ghost's Smash Cereal that can be found across Fortune Valley.

They are highlighted by an icon of a billboard. Nearby billboards will be telegraphed to the player and records its location on the player's map.

Driving through a billboard will count it as being collected, and will be added to the player's journal as being found as well as having a tick next to its icon on the map.

Each billboard collected rewards the player with

30,000. Owning the High Roller Pack will add an extra 5% bank and reputation reward to each smashed billboard.

Collecting all 30 will unlock the "Does Not Obey" award.

There are a total of 30 billboards across Fortune Valley; 10 in Mount Providence, 6 in Liberty Desert, 3 in Silver Rock, 3 in Ember Valley, and 8 in Silver Canyon.

Retrieved from "https://nfs.fandom.com/wiki/Need_for_Speed:_Payback/Billboards?oldid=131282"
Community content is available under CC-BY-SA unless otherwise noted.