The player will be given a clue as to its location upon collecting the chassis from the clue rewarded for completing the Jess: Runner questline, in chapter 3 - City Lights.

The Bel Air engine and drivetrain crate can be found near a cliff edge in the northwest region of a town in Silver Canyon.

The player is required to complete the Jess: Runner questline in chapter 3 - City Lights and collect the Bel Air chassis, before they can collect the engine & drivetrain.

Collecting the engine and drivetrain crate will deliver it to Rav's garage on Airfield 73. 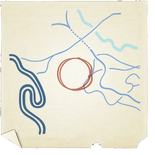