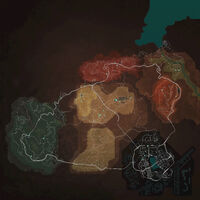 Jumps in Need for Speed: Payback are activities to beat a series of jump distance targets that can be found across Fortune Valley.

They are highlighted by an icon of an arrow leading along a ramp. Nearby jumps will be shown on the player's mini-map, but its location isn't recorded on their map unless they pass through a jump's starting point.

Each star rating target has a different reward for the player upon beating it:

Owning the High Roller Pack will add an extra 5% bank and reputation reward to all target rewards.

Earning a single star rating for all 30 jumps will unlock the "Aces High" award.

There are a total of 30 jumps across Fortune Valley; 4 in Mount Providence, 14 in Liberty Desert, 5 in Silver Rock, and 7 in Silver Canyon.

Retrieved from "https://nfs.fandom.com/wiki/Need_for_Speed:_Payback/Jumps?oldid=130070"
Community content is available under CC-BY-SA unless otherwise noted.