Performance Parts in Need for Speed: Payback are used to improve the performance level and ratings of cars.

Parts can be acquired from Speed Cards which can be purchased from Tune-Up-Shops. They are also awarded for completing events, opening Shipments (

), and from a roll through the Trade-In section of a Tune-Up-Shop using Part Tokens ( 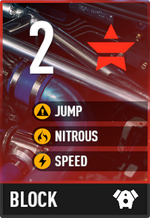 A performance part is represented as a Speed Card that highlights four aspects that alter the performance ratings of a vehicle;

Owned performance parts are retained on a per vehicle basis and cannot be exchanged between vehicles. They can, however, be sold for Bank (

) at any player owned garage or Tune-Up-Shop, or can be traded in for Part Tokens (

) at a player owned garage or Tune-Up-Shop.

Each vehicle has six parts that can be swapped and upgraded with better performing parts. Higher rated parts offer greater improvements to a vehicle's horsepower and top speed ratings within Speed, as well as the 0 - 60 mph and 1/4 mile times within Acceleration.

Cylinder head upgrades can change the size and design of the parts which define the volume of air and fuel that can flow to the combustion chamber. Better airflow is key in allowing the engine to create additional power.

The engine block is the foundation of an internal combustion engine. Upgrading this is a good way to increase the engine's durability so it can handle more power.

An aftermarket electrical control unit (ECU) will provide cohesion to all installed components of the engine. The brains of a car; this will make sure all elements work together increasing efficiency and maximising output.

Forced Induction comes in many forms; a supercharger will be most noticeable at lower RPM's unlike a turbocharger that tends to provide less boost until the engine is running at higher RPM's. In all cases though, installing or upgrading a forced induction item will give the engine an increase in torque providing faster acceleration.

Exhaust gasses travel through the exhaust system as they exit the engine. A less restrictive exhaust can wake up the engine and provide extra flow.

Transmission allows for the regulation and control of a vehicle's power from its engine to its wheels. The transmission can include the clutch, drivetrain, gearbox, gear ratios, and differential.

Brands of parts can be collected and equipped to the same vehicle to create additional performance perks.

There are five brands available and each can be matched together to create a Brand Bonus that offers a performance rating improvement to specific categories per brand. Matching can be done with either six parts by a single brand or six parts with three of each by two different brands.

Stock are basic parts that are equipped to cars that can be purchased from Dealerships or earned through career progression.

They are shown with grey Speed Cards that can be purchased from Tune-Up-Shops, but while they can offer perks, they can not be matched for a Brand Bonus.

They can be matched together for a Brand Bonus increase in Nitrous and Air ratings.

They can be matched together for a Brand Bonus increase in Acceleration and Air ratings.

They can be matched together for a Brand Bonus increase in Acceleration and Brakes ratings.

They can be matched together for a Brand Bonus increase in Speed and Brakes ratings.

They can be matched together for a Brand Bonus increase in Speed and Nitrous ratings.

A Speed Perk improves the horsepower and top speed ratings of a vehicle on top of the alterations by a performance part.

An Acceleration Perk improves the 0 - 60 mph and 1/4 mile ratings of a vehicle on top of the alterations by a performance part.

A Nitrous Perk improves the N2O capacity and N2O power ratings of a vehicle.

A Jump Perk improves the airtime and landing ratings of a vehicle.

A Brakes Perk improves the brake power and brake response ratings of a vehicle.
Retrieved from "https://nfs.fandom.com/wiki/Need_for_Speed:_Payback/Performance_Parts?oldid=120331"
Community content is available under CC-BY-SA unless otherwise noted.