Need for Speed: Payback is the upcoming twenty-third game in the Need for Speed series currently in development at Ghost Games.

It has a set worldwide release by publisher Electronic Arts for November 10, 2017 as well as an earlier November 7, 2017 release for the Deluxe Edition.

The name of the 2017 game was revealed on June 2, 2017 with a trailer showcasing the location, high-concept of the plot, and multiple vehicles that will appear in the game. A Deluxe Edition was also announced at the end of the trailer.

Numerous teasers were released leading up to the game's reveal on June 2, 2017 such as an initial reveal of the game's setting with an Under the Hood article and multiple tweeted images leading up to June 2nd.

An in depth look at the game was shown at Electronic Arts' EA Play event in Hollywood, Los Angeles on June 10, 2017. A gameplay trailer of a mission, in which Tyler and Jess steal a Koenigsegg Regera from the back of a semi trailer, was shown with a small amount of customisation features were demonstrated at a later point in the show.

The single player campaign follows Tyler Morgan, a former street racer and exile looking for revenge. He's double crossed by Lina Navarro and must build a crew towards winning the impossible Outlaw's Rush race to bring down a cartel, The House, that has their presence across the city's casinos, criminals, and law enforcement.

Players take on the role of three characters across the single player campaign;

Each have their own quests towards bringing down The House.

Taking place in the fictional Fortune Valley, players can purchase new cars or rebuild abandoned derelicts, and can customise their vehicles with parts they either win or buy. They can use those rides to participate in races, missions, and activities in single player or multiplayer SpeedLists.

Each event has a optimal performance rating before entering as well as an Autolog recommendation from either a friend or a rivals. Players can also swap their vehicle before entering an event.

Completing an event will reward the player with reputation, cash, and a speed card.

A side bet is an optional wager that can be placed at the beginning of an event.

Accepting a bet has a stake that has to be paid, and beating its requirements will reward the player with additional cash to their race winnings based on the odds offered for the bet.

Autolog offers a set leaderboard time from a friend or rival for an event that when beaten will reward the player.

Each has their own skill level, racing discipline, style, and crew boss. Defeating them is important in making it to the Outlaw's Rush.

Main article: Need for Speed: Payback/Speed Cards
Speed Cards are rewards offered as a reward for winning an event.

Each event win offers a single card from a selection of three and each card includes a performance part or vanity item.

Main article: Need for Speed: Payback/Shipments
Shipments are reward containers that can be earned through gameplay or can be purchased.

Each contains a selection of performance parts or vanity items that can be equipped to cars.

Police will intervene and pursue the player through a series of Heat Levels.

Each Heat Level will introduce additional police presence, apprehension tactics, and equipment such as roadblocks, spikestrips, helicopters, and Rhino units.

The FVPD is the local law enforcement agency in Fortune Valley and has a capable selection of pursuit units, but also has ties to The House cartel.

Derelicts are abandoned cars that can be restored to stock form, and them improved upon through customisation.

Vehicles are categorised into a specific car class during purchase of which all cars are restricted to two or three classes except for Derelicts which can be customised into any of the five classes.

Customisation allows for any owned cars to be altered and personalised to a player's taste. Various visual aftermarket components, performance parts, paint schemes, vinyls, and stance can be equipped or manipulated to craft a unique vehicle.

Parts available can be equipped to vehicles through the garage, but the amount of available parts differs between vehicles.

The Stance of a vehicle can be manipulated through various elements of a vehicle's suspension setup in the garage with a Tune Stance option.

Performance Parts can be equipped to improve the capabilities of a vehicle, but some upgrades can be chosen over others to push a vehicle towards a specific setup or set of driving requirements.[6]

Applying parts will improve a vehicle's tier from tier 1 being stock and tier 3.99 being maximum based upon the level of performance parts installed. Performance parts can have a level between 1 to 18.

Performance parts can be acquired from Part Shops across Fortune Valley as well as from rewards for completing events.

Each vehicle has six categories that can be swapped and upgraded with better performing parts;

A Targeted Roll system allows for a increased amount of choice in a part, but requires other parts to be recycled and used to create a new part.

Perks can be equipped to performance parts to provide an additional bonus to an improved part in aspects such as top speed, acceleration, nitrous, air, and braking. Some parts can be equipped with more than one perk.

The brand name of a performance part will highlight a particular specialisation towards improving a vehicle. Installing multiple parts from the same brand will invoke a bonus based through brand synergy.

Tuning can be accessed whilst in free roam and allows for fine-tuning of a vehicle's performance or driving characteristics. The available selection of tuning options differs between car classes with some offering specific tuning sliders.

Fortune Valley is a fictional region based on Las Vegas, Nevada. The area consists of the glamorous Silver Rock City, the arid Liberty Desert, the peaks of Mount Providence, and the deadly drops of Silver Canyon.

Dealerships can be found across Fortune Valley with each having a rotating availability of stock and each specialising in a certain style of vehicle such as exotics, classic, muscle, rally, sports, and sports compact.

Part Shops across Fortune Valley allow for performance parts to be equipped to cars from either a rotating selection of items that can be purchased or those won from events.

Garages across Fortune Valley allow the player to switch cars, customise owned vehicles, or construct derelicts. Owning multiple garages will increase the number of vehicles a player can own, and upon owning all five, will unlock an unlimited number of slots in the virtual warehouse to store cars.

Gas Stations across Fortune Valley can be driven through to refill nitrous and repair any visual damage to a vehicle.

The 2017 game was first revealed to be in development on May 10, 2016 with the release of Under The Hood #7: Taking Stock[7] on the official Need for Speed website.

The special announcement highlighted the SpeedLists update would be the last free content update for Need for Speed (2015), and the community's feedback towards the 2015 game would be taken in towards the development of the 2017 game.

It was announced on January 27, 2016 that Electronic Arts would not be attending E3 2016 in favour of hosting their own EA Play conference[8]. On June 9, 2016, Electronic Arts' Global Content and Community Manager, Ben Walke, tweeted that no games in development at Ghost Games were set to be announced during the conference[9]

A Narrative Writer position was listed on the jobs section of Ghost Games' website for their studio in Guildford, England. The position listed a role encompassing character development, writing scripts for performance sessions, and would be beneficial to have a knowledge of car culture.[10]

On November 7, 2016, a trademark for Need for Speed: Arena was published for ownership by Electronic Arts[11]. The trademark application was filed with the European Union Intellectual Property Office (EUIPO) with a 9 and 14 Nice classification, covering the usage of the term for a computer game software and an online entertainment service respectively.[12]

Electronics Arts' quarterly earnings call for the third quarter of fiscal 2017 was held on January 31, 2017. During the call, a rundown of Electronic Arts' previous quarter was discussed, and hinted at the 23rd Need for Speed game.

On March 23, 2017, an official Electronic Arts blog post was published dating the availability of tickets for the show, and that Need for Speed will be playable for participants.

The post highlighted Ghost Games' continued passion for the Need for Speed series, and that they feel "honoured and privileged" to be developing the next game for the fans of the series, which will be released before the end of the 2017 calendar year.

In the opening section of the post, the article states that Ghost Games has been surprised by the amount of feedback received from the Need for Speed community following the release of Need for Speed (2015).

Customisation is described as having a strong role within the game and beyond its release. Police are also noted to be pursuing racers during street races and the presence of Rhino units.

The environment in which the game will take place is depicted with a teaser image that was part of the article. It shows a Motel sign flickering near a red rock cliff with a setting sun casting through a clouded sky, and a Nissan 350Z parked against a chain link fence adjacent to a field of tall grass.

Another sign below the flashing Motel sign has the date June 2nd written across it. June 2, 2017 is eight days ahead of Electronic Art's EA Play event in Los Angeles, which will feature Need for Speed (2017) playable on the show floor.

Its setting is characterised as a beautiful location that offers space for both tarmac and offroad gameplay, with the option to take customised cars to events along a canyon setting or take jumps to avoid police attention.

The article ends by stating that the game will feature a single player experience that can be played offline and can also be paused.

On May 30, 2017, the official Need for Speed Twitter account tweeted an image showing a bright white mist.

Adjusting the levels of the image reveals a few skyscrapers and a tower poking up from the base of the image. The buildings that appear in the image bear a resemblance to the Las Vegas skyline.

On May 31, 2017, the official Need for Speed Twitter account tweeted a second image showing a car engulfed in a bright white mist.

Adjusting the levels of the image reveals the same few skyscrapers and a tower from the image tweeted a day prior, but positions them as a background to a modified Nissan Skyline GT-R V-Spec (R34) performing a donut in the foreground.

On June 1, 2017, a third image was released including the previous two images of a city skyline and a Nissan Skyline GT-R V-Spec (R34) alongside the release time of the game's reveal.

The image highlighted the game's full reveal across multiple time zones at 06:00 in Los Angeles, USA; 14:00 in London, United Kingdom; and 23:00 in Sydney, Australia. It also included a link to the official Need for Speed Youtube channel. 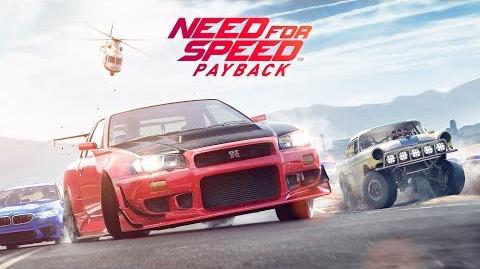 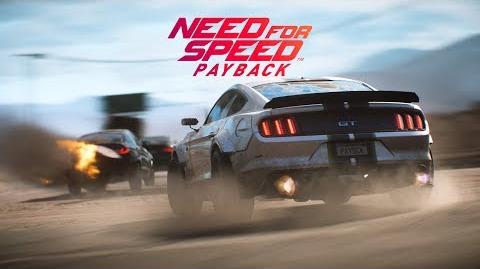 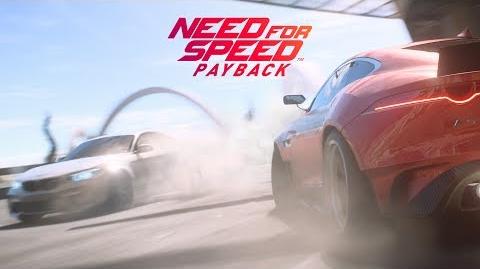 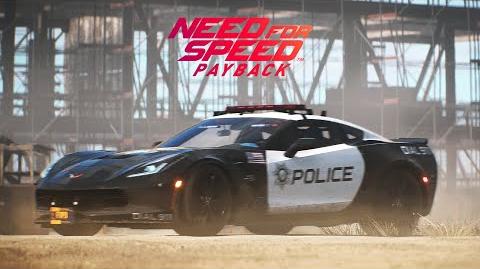 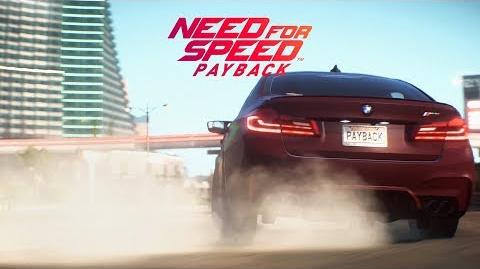 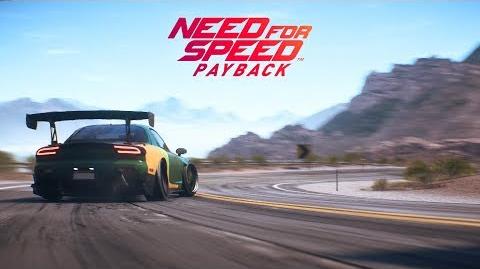 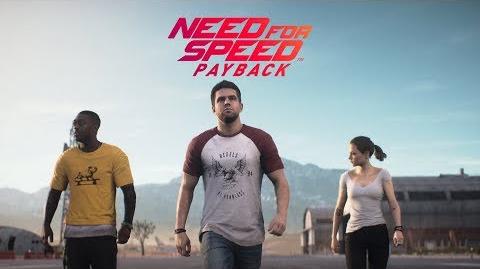 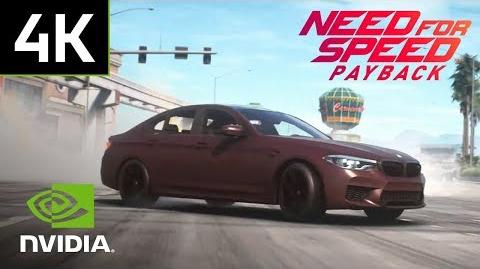 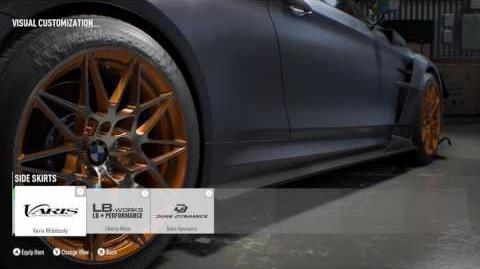 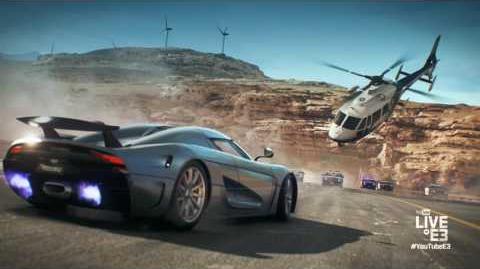 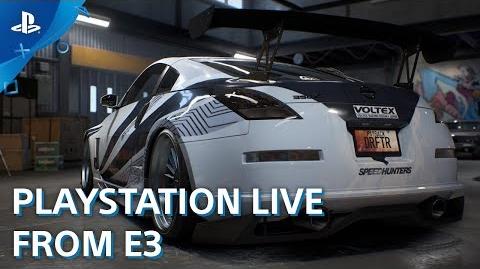 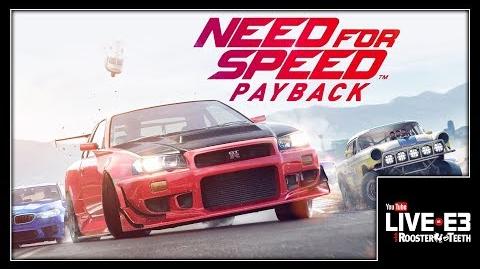 Retrieved from "https://nfs.fandom.com/wiki/Need_for_Speed:_Payback?oldid=114162"
Community content is available under CC-BY-SA unless otherwise noted.