ProStreet
The Limited Edition is a retail release of Need for Speed: ProStreet made available for the Xbox 360 release, but could only be purchased in Japan.

It includes a regular release of Need for Speed: ProStreet as well as a number of items adorned with the game's branding. 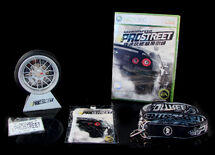 Retrieved from "https://nfs.fandom.com/wiki/Need_for_Speed:_ProStreet/Limited_Edition?oldid=141675"
Community content is available under CC-BY-SA unless otherwise noted.