Need for Speed Wiki
Register
Don't have an account?
Sign In
Advertisement
in: Games, Need for Speed Series, PC (Game),
and 3 more

First announced on June 18, 2020 as part of Electronic Arts' "EA Play Live June 2020" presentation, it was shown during a section about the publisher's next generation series of games, targeting the then unreleased PlayStation 5 and Xbox Series X/S hardware.

Following its first official reveal in June 2020, it is being developed by Criterion and is described as to "include a new Need for Speed game that is bringing some astounding visual leaps, developed by the Criterion team, who have launched some of the most highly-rated games in franchise history". Alongside Criterion, Codemasters Cheshire is assisting in development of the game and the Need for Speed series as a whole.

The game's development was pushed back by a year in March 2021, with Criterion pausing development of their Need for Speed game to assist DICE and their in-development "Battlefield 6", which would later be revealed as Battlefield 2042.

On May 11, 2022, the official Codemasters Twitter account posted a series of tweets announcing the Codemasters Chesire team would be integrating with Criterion Games to work on the Need for Speed series.

The Codemasters Cheshire team is based in Runcorn and developed DIRT 5. They were formally Evolution Studios, having worked on the Motorstorm series and Drive Club.

On May 10, 2022, Electronic Arts held an earnings call for the fourth quarter of their 2022 fiscal year.

One of the images includes a Mitsubishi Lancer Evolution IX MR FQ-360 parked near a body of water with a view of the Lakeshore City skyline, and the another of a map for the game's setting with debug segment zones overlaid on top of the road network. 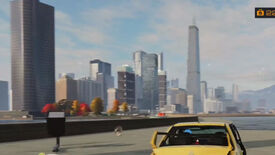 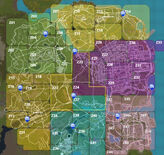 In episode 42 of GrubbSnax, published on April 14, 2022, Jeff Grubb reiterated points made by other publications regarding recent leaked information[8]: the game's console releases could only be for "next-generation" devices - PlayStation 5 and Xbox Series X/S - and could have a November release month.

He reiterated a previous leak relating to the game's setting potentially being set in Miami, similar to the fictional setting of Need for Speed: Heat, but backtracked on the validity on the information given to him at the time, and denounced it in episode 42.

Following the correction for the game's location, he began listing features and aspects he felt confident were present in the upcoming game, as well as the game taking place in a fictionalised rendition of Chicago called "Lake Shore City". Chicago has previously appeared in Need for Speed: ProStreet and Need for Speed: The Run.

Autolog's appearance in prior Need for Speed games has been as an asynchronous multiplayer leaderboard for friends to compete against each other outside of traditional multiplayer.

Similar visual effects in a leaked gameplay video published in late 2020[9] follow Jeff's description of "It's going to be photorealistic, but it's going to have - on top of that - there's going to be like "anime" elements".

Closing his segment about Need for Speed, he said "I imagine you're going to hear about this game pretty soon".[8]

On February 10, 2022, a series of tweets by Tom Henderson relayed leaked information from an internal Electronic Arts Town Hall meeting. The tweets highlighted that Codemasters Cheshire - the studio behind both Onrush and DiRT 5 under Codemasters, and previously Evolution Studios prior to their purchase in April 2016 - would be assisting Criterion in the development of the Need for Speed series.[10][11]

On January 21, 2022, a tweet by Tom Henderson[12][2] speculated that the release of Criterion's Need for Speed would be within September to October 2022, which is a similar release timeframe for nearly all previous releases in the Need for Speed series, and an October release would place it within the third quarter of Electronic Art's 2023 fiscal year.

On December 4, 2021, a tweet by Helene Kiji, a producer at Criterion whom recently joined the studio having moved on from Gameloft, expressed her thanks for a welcoming gift she received from Criterion.[13] The tweets were deleted soon after they were reposted.

Alongside the thank you message, two images of a Criterion/NFS branded tote bag were included with the tweet, of which two posters of unreleased media relating to Criterion's in-development Need for Speed were underneath it.

One of the posters depicted a red Nissan 200SX (S14) fitted with a chassis mounted spoiler similar to a Street Faction Engineering design, and was surrounded by multiple stickers with a style reminiscent of 1980s punk rock. 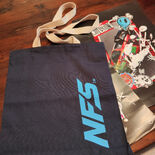 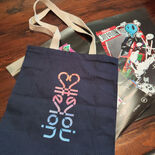 On October 10, 2021, it was reported that Codemasters Cheshire had an open position for a Develop Manager, with the role describing that it would be for "the most ambitious and biggest game that Codemasters has made in over a decade".[15]

On May 11, 2021, Electronic Arts held an earnings call for the fourth quarter of their 2021 fiscal year.

During the call, CEO Andrew Wilson was asked by Mike Hickey about the future of the Need for Speed series with regards to Criterion, to which he, as well as CFO and COO Blake Jorgensen, replied to Criterion's expertise for both the Need for Speed and Battlefield series, alongside noting the recent purchase of Codemasters would add to the series and the company's racing franchises.[17]

On February 2, 2021, Electronics Arts held an earnings call for the third quarter of their 2021 fiscal year.

During the earning call, their nearing acquisition of Codemasters was highlighted - which they had outbid Take-Two Interactive to purchase for $1.2 billion a few weeks prior[20] - and the studio's talents could contribute to the Need for Speed series.

The acquisition of Codemasters was completed over two weeks later, with Electronic Arts gaining control of the Southam, Birmingham, Cheshire, Slightly Mad, and Kuala Lumpur studios, alongside the DiRT, GRID, Project Cars, Formula 1, and WRC series.[22]

On November 5, 2020, Electronic Art released its second quarter 2021 Fiscal Report. Within the report, it outlines that Criterion's in-development Need for Speed would be releasing within EA's 2022 fiscal year, which is between April 1, 2021 to March 31, 2022.

The published footage was taken from an in-development build, of which the environments shown are in an early greybox state meant for level design and testing, with only the Porsche 911 GT2 RS being driven by either the player or any A.I. opponents.[9]

The car being driven by the player has a licence plate reading "EXC" referring to the game's development codename: "Excalibur".

On June 18, 2020, Criterion's in-development Need for Speed was first officially announcement during the "Next Gen Teaser" section of Electronic Arts' "EA Play Live June 2020" presentation, in which a scene of a customised Nissan 180SX (S13) and a stock Porsche 911 GT3 RS were shown against an HDRI backdrop.[25]

On February 12, 2020, Electronic Arts announced that Criterion Games would become the franchise leader of the Need for Speed series, a position it was initially given in 2012[26] following on from EA Black Box's long stewardship of the series, and was passed onto Ghost Games in 2013.[27]

With Criterion taking ownership of the series back from Ghost Games, all of the studios under Ghost Games were reverted to their prior duties within Electronic Arts. Ghost Games became EA Gothenburg again, Ghost Games UK was reintegrated into Criterion following its split in 2013[28] as well as a consultation period for some job roles in 2014[29], and Ghost Games Romania becoming EA Romania.

During the transition, an EA representative highlighted that while those in roles for engineering and planned transfers would be retained, a remaining thirty roles within Ghost Games in Sweden would hopefully be transferred within the company.

As a reason for the series' transition from Ghost Games back to Criterion, it was outlined that Electronic Arts was struggling to attract the wanted and needed talent to Gothenburg.

The changing of leading studios for the series came four months after the release of Ghost Games' final game in the series under their name: Need for Speed: Heat, of which had its post-launch content reduced, with its fifth and final update being released on June 9, 2020.