< Need for Speed II
View source
watch 02:52
Roblox: DeepWoken - The Loop
Do you like this video?
Play Sound 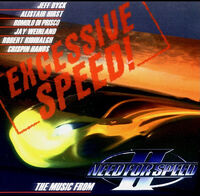 The Soundtrack for Need for Speed II is the first in the Need for Speed series to use interactive music, which is adapted to the situation of the race. Courses have two unique themes, with songs featuring elements based on the different locations's aesthetics.

A CD compilation album was released on April 28, 1997 entitled The Music from Need for Speed II: Excessive Speed!