It is an open-world mobile game being developed by TiMi Studio Group, a subsidiary of Tencent, and is likely to be published by Tencent for the Chinese mobile gaming market with Electronic Arts still retaining the rights to the Need for Speed series.

The game has not been formally announced, although Tencent has worked with Electronic Arts' Need for Speed series before with two prior products:

In mid-May 2022, an invite-only play test session was held for a "Codename: Racing" iOS game through the Tencent Pioneer app. Over 1,500 players participated and were asked to give feedback.[1][2]

Following the session's completion, gameplay footage was leaked on the Need for Speed subreddit, as well as various pictures.[3][4]

The setting for the game, the assets used, and included music are derived from Need for Speed: Heat.[5]

On January 2, 2022, job listings appeared on the Tencent Careers page with roles at TiMi Studio Group described as working on a "real-world racing mobile game" for a "Well-known IP". As part of the job listing, two advertisements were circulated highlighting the game to be developed using Epic Games' Unreal Engine 4 and that it would be a "AAA" game.[6][7][8] 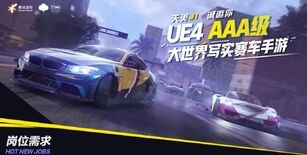 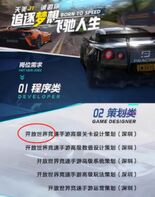 As well as the listings of various roles at TiMi Studio Group, a product list was published by Tencent with their third quarter release schedule for 2022, and includes a licenced "Need for Speed Online Mobile" game listed with a "to be confirmed" (TBC) date.[9]

Tencent's third quarter for their fiscal year is from July 1st to September 30th.

On August 4, 2021, Daniel Ahmad, a Senior Analyst at Niko Partners, posted a series of tweets regarding Electronic Arts' financial results for their first quarter of fiscal year 2022. One of the tweets in the series was with regards to Electronic Arts' plans with regards to the Need for Speed series, of which a mobile game for the series being developed by Tencent was mentioned alongside a new console game.