Need for Speed Wiki
Register
Don't have an account?
Sign In
Advertisement
in: Vehicles, 2010s, Nissan,
and 16 more

The Touring model is equipped with several luxury equipment options and may be ordered with the Sport package, which includes performance enhancing parts such as SynchroRev Match and sport brakes.

The 370Z Roadster outperforms the coupé thanks to the addition of Amerikon Speedsystems street tuned parts. However, the 370Z Roadster does feel less responsive and nearly identical to the coupé without any parts. It is capable of reaching a top speed of 165 mph (265 km/h).

Some users received this style as a surprise gift following a maintenance window on May 30, 2012, but this was an unintentional action by the developers.[1]

The 370Z Roadster appears in Need for Speed: Hot Pursuit (2010) as a Sports Series racer vehicle.

The racer vehicle is unlocked upon the player earning a total of 60,000 racer bounty.

It performs similarly to its coupé counterpart and there is no SCPD unit available.

The 370Z RoadsterRoadster appears in Need for Speed: Hot Pursuit Remastered as a car tier 1 vehicle available to racers.

It performs very similar to the coupé 370Z, but is not available as an SCPD unit.

The 370Z Roadster is a Sports Series racer unlocked upon earning 30,000 racer bounty. 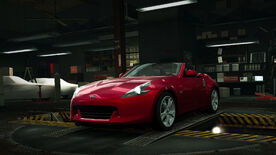 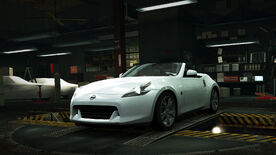 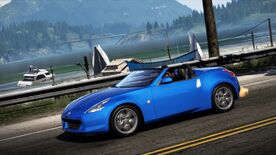