Need for Speed Wiki
Register
Don't have an account?
Sign In
Advertisement
in: Vehicles, 2010s, Nissan,
and 11 more

The 3.8L Twin-Turbo V6's power output was increased to 542 bhp by revamping the ECU, adjusting the valve timing, enlarging the inlets, and by updating the engine's exhaust system. The front and rear suspension geometry has been altered as well for better handling.

The Egoist Edition is the highest trim line for the 2011 GT-R. It features exclusive luxurious interior styling with 20 available interior colours and a BOSE sound system that's individually optimised for customers. It is only produced in Storm White colour.

The Nissan GT-R Egoist was revealed on pre-release screenshots of Need for Speed: Most Wanted (2012).

It is made available in the final release as a Sports class vehicle. In singleplayer, the car can be found in various Jack Spots. It is unlocked upon reaching a certain SpeedLevel in multiplayer.

The GT-R Egoist is one of the fastest Sports cars in the game. Its acceleration is very similar to that of the Porsche 911 Carrera S. Handling is responsive and useful for drifts because of AWD. Top speed is 199 mph (320 km/h).

It is also effective in Pursuit events, where the performance of the GT-R Egoist can be useful for outrunning the police and for performing takedowns.

The Nissan GT-R Egoist appears in the iOS and Android releases of Need for Speed: Most Wanted (2012) as the #3 Most Wanted vehicle under the name of "GDZLLR". The GT-R Egoist can only be purchased after defeating it in the event - SuperEgoist. 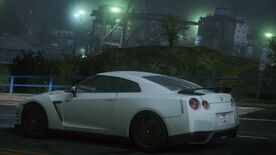 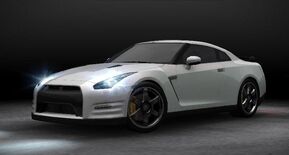