Need for Speed Wiki
Register
Don't have an account?
Sign In
Advertisement
in: Vehicles, 2010s, Nissan,
and 14 more

The 2010 Nissan GT-R GT1 (R35) is a race car based on the Nissan GT-R (R35) production model. It was primarily designed for competing in the FIA GT1 World Championship, which resulted in the vehicle becoming RWD and using a naturally-aspirated V8 powertrain.

The car was used by several teams during the 2010 and 2011 sessions of the FIA GT1 Championship including Sumo Power.

The Nissan GT-R GT1 appears in Shift 2: Unleashed as a Modern GT1 car with a performance index rating of A 1800 and 5,06 handling rating.

It is not obtainable in the car dealer, but will be rewarded to the player after beating Jamie Campbell-Walter in the FIA GT1 Discipline. 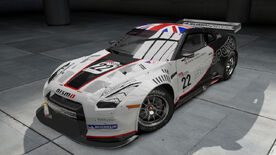