Need for Speed Wiki
Register
Don't have an account?
Sign In
Advertisement
in: Vehicles, 2010s, Nissan,
and 10 more

Introduced in 2010 as a 2011 model, the Nissan Leaf was fitted with a 24 kWh lithium-ion battery that had a range of 109 miles on the New European Driving Cycle.

The aerodynamic design had a drag coefficient of 0.29 and a full battery recharge would take around 12 hours using a standard 220/240V AC outlet.

For the 2013 model, the drag coefficient was reduced to 0.28 and the 2016 model had the battery upgraded to a 30 kWh battery, increasing the range to 124 miles on the New European Driving Cycle.

The Leaf appears in Need for Speed: No Limits as a traffic car. 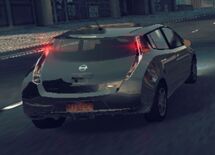 Need for Speed: No Limits
(Traffic)
Community content is available under CC-BY-SA unless otherwise noted.
Advertisement