Four R390 GT1s participated in Le Mans the following year. They were slightly upgraded from the R390 to generate more downforce by extending the tail bodywork, and all four R390 GT1s were able to finish the race (3rd, 5th, 6th, and 10th).

The R390 appears in Over Drivin' Skyline Memorial, a localised Japan release of The Need for Speed, for PlayStation. The R390 GT1 is unlocked by completing the Tournament Mode, and is the only race car to be featured in the game. 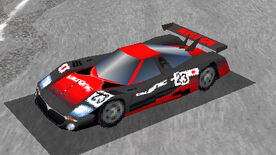