Need for Speed Wiki
Register
Don't have an account?
Sign In
Advertisement
in: Vehicles, Cars, Nissan,
and 10 more

On August 21, 1987, the 2000GTS-R was launched as a limited-edition model made up of only 823 examples. The GTS-R had a reworked engine including a larger turbo, a tubular steel exhaust manifold, and a larger front-mounted intercooler. It had two world firsts for a production car: a card entry system and HICAS (High Capacity Actively Controlled Steering) 4-wheel steering system in 1986.

Building over 800 examples of the GTS-R allowed homologation for Group A Touring car competition. Racing GTS-R models were manufactured by Nissan Motorsports Europe in England from 1988 and they produced 430 horsepower. They competed in the 1988 European Touring Car Championship (ETCC) and came 6th for the NME Team in the 1988 24 Heures de Francorchamps at Spa-Francorchamps.

The HR31 appears in Nissan Presents: Over Drivin' Skyline Memorial, a localised Japan release of Road & Track Presents: The Need for Speed, for PlayStation. 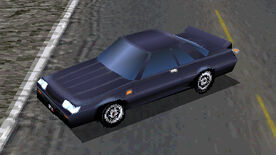