Need for Speed Wiki
Register
Don't have an account?
Sign In
Advertisement
in: Vehicles, Cars, Nissan,
and 10 more

The R34 GT-R was made to be shorter (from front to rear) than the R33 as well as having the front wheels made pushed to the front. The valve covers were also painted glossy red, rather than dull black.

A new feature of the R34 GT-R was a 5.8" LCD multifunction display on the center of the dashboard, which showed seven different live readings of engine and vehicle statistics such as turbocharger pressure (1.2 bar max), oil and water temperature, among others.

The Nissan Skyline GT-R R34 appears in Need for Speed: Nitro as a class B tuner car. It is rated 3 in speed, acceleration, drifting, and strength; and 2 in handling. It can be seen in the game's intro video.

A Skyline GT-R R34 with a unique livery can be unlocked as a Collectable Car for use in both Arcade Mode and Career Mode, once all stars are obtained in all Silver Cup events. 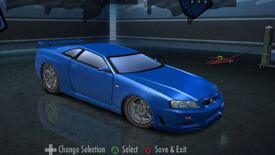 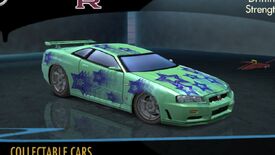