Need for Speed Wiki
Register
Don't have an account?
Sign In
Advertisement
in: Vehicles, Cars, Nissan,
and 11 more

The car was built on used Skyline GT-R V-Spec II models with less than 30,000 km (18,641 mi) of mileage and was a showcase of Nismo's engineering technology gathered from motorsport events such as the 24 Hours of Le Mans and Super GT series.

It received an altered bodywork with heavy usage of carbon-fibre for parts such as body shell, bumpers, and bonnets. Performance-wise, the car had a modified version of the twin-turbo RB26DETT straight-six engine used in older Skyline GT-R models and brakes which were made in collaboration between Brembo and Nismo specifically for the car.

The Skyline GT-R Nismo Z-tune was made available in Need for Speed: World on September 21, 2012 as an A class vehicle.

Performance-wise, the Nismo Z-tune bore a resemblance to the Nissan GT-R SpecV with the only difference being the handling. It had a similar acceleration and nitrous output.

Unlike other Skyline GT-R models, the Z-tune had a very direct steering as well as good traction. It was possible for players to keep up with the Lexus LFA in corners, although there was a chance of understeer during excessive cornering. Top speed was 203 mph (327 km/h).

The Z-tune was suitable for both competitive multiplayer matches and Pursuit Outrun events with high heat levels. Pro and Ultra upgrades could raise its rating to S class.

The White style is a stock cash car that costs 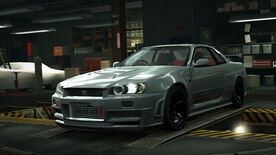 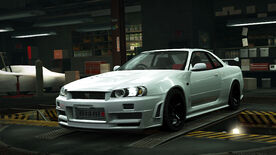 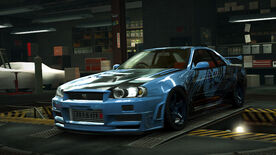 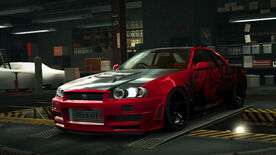