1540 kg (3395 lbs)
The Nissan Skyline GT-R V-Spec II (R34) is an updated variant of the 1999 V-Spec model. Changes include a stiffer suspension and a carbon fiber hood with NACA ducts.

The V-Spec II was produced from 2000 to 2002. It was also available as the upgraded Nür model and as the N1 homologation special.

It is introduced by Dino Dalle Carbonare in a poor visual condition with the goal to restore it within five days through various events. The starting performance rating is 456.

The stock Skyline GT-R V-Spec II (R34) is a classic sports class car that requires 10 common blueprints to unlock. The blueprints required to unlock the vehicle can be found from various sources:

Need for Speed: No Limits
(Promotion) 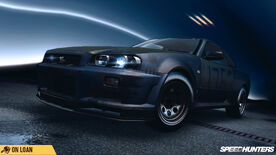 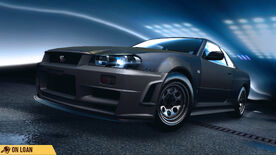 Need for Speed: No Limits
(Speedhunters Bodykit)
Retrieved from "https://nfs.fandom.com/wiki/Nissan_Skyline_GT-R_V-Spec_II_(R34)?oldid=132349"
Community content is available under CC-BY-SA unless otherwise noted.