Need for Speed Wiki
Register
Don't have an account?
Sign In
Advertisement
in: Vehicles, 1980s, Nissan,
and 10 more

Following a redesign in 1981, the sixth-generation Skyline emerged with the Skyline RS model, a performance trim powered by a 2-litre straight-4 FJ20 engine.

While initially offered in a naturally aspirated configuration, in 1983 it was fitted with a turbocharger and became the Skyline Turbo RS, featuring a redesigned front end that gave it the nickname "Tekkamen" meaning "Iron Mask."

In 1984, the Skyline RS-X Turbo C was introduced with the addition of an intercooler for the turbocharger, which boosted performance through the extra cooling and gave it a recognisable small air intake to the front splitter.

The KDR30 appears in Nissan Presents: Over Drivin' Skyline Memorial, a localised Japan release of Road & Track Presents: The Need for Speed, for PlayStation. 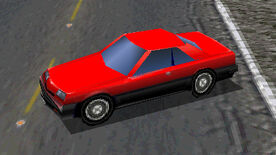