Need for Speed Wiki
Register
Don't have an account?
Sign In
Advertisement
in: Vehicles, Cars, Nissan,
and 11 more

Entering production in August 1977, the fifth-generation Skyline was offered in a 4-door saloon or coupé hardtop with various 3-speed to 5-speed gearbox options. 1600 to 1800 models were offered with either a 1.6 or 1.8-litre inline-4 engine.

The GT-R trim, previous used with the fourth-generation C110 model, was discontinued and replaced by the GT-E coupé hardtop range. They were fitted with 2-litre inline-6 engines, and in 1980, the GT-E became the first production Japanese cars to be powered by a turbocharged engine.

The L-Type, X-Type, and S-Type differentiated between multiple interior and equipment options.[1]

In 1981, the GT-E range were replaced with 4-door saloon models before production of the fifth-generation ended in 1981, and the sixth-generation R30 entered production.

The KHGC211 appears in Nissan Presents: Over Drivin' Skyline Memorial, a localised Japan release of Road & Track Presents: The Need for Speed, for PlayStation. 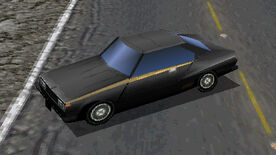