Need for Speed Wiki
Register
Don't have an account?
Sign In
Advertisement
in: Vehicles, 2020s, Nissan,
and 12 more

A "Z Proto" concept was first unveiled in New York City by Nissan through their official YouTube channel on August 17, 2021 after being teased over two years prior in 2018 by Alfonso Abaisa, Senior Vice President for Global Design, stating a successor to the 370Z was in development.

Following the reveal of the prototype design, the road-going car entered production in April 2022, with a limited run of 240 "Z Proto Launch Edition" units for the first batch of models produced, and the two regular trims offered soon after - the "Sport" and "Z Performance" - in summer 2022, although no model is being sold in Europe.

The "Sport" trim is offered as the base model with a 3-litre twin-turbocharged V6, which is also fitted to the Infiniti Q60S 3.0t Red Sport 400, producing 400 bhp and 350 lb⋅ft of torque. It is also fitted with a carbon fibre driveshaft and a six-speed gearbox with an Exedy clutch, but can be fitted with a nine-speed automatic.

The "Performance" trim offers the same engine and output as the "Sport" trim, but is fitted with more upgrades such as larger brake rotors, aluminium calipers with a painted red finish, 19" Rays forged wheels, front and rear spoilers, and a sportier suspension setup.

Tsugio Matsuda, a driver for team Nismo in the GT500 class of Japan's Super GT touring car racing series, was consulted Nissan to assist in creating the interior, having his input help establish the driving position and the placement of instruments.

The stock Z Performance is a sports class car that requires 40 rare blueprints to unlock. The blueprints required to unlock the vehicle can be found from various sources: 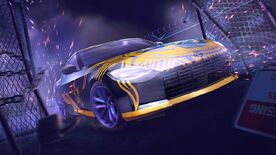