Need for Speed Wiki
Register
Don't have an account?
Sign In
Advertisement
in: Locations, Cities, Need for Speed: Underground

Olympic City is a fictional location in which Need for Speed: Underground takes place, and is made up of many different districts; Downtown, Market District, Chinatown, Port Royal and an airport.

Downtown and Inner City is the area the player starts out in. It is located in the central and northern part of the city and is where many of the races happen during the game.

It features many tall buildings, busy streets and wide boulevards. It also has a neon district, and some industrial and construction areas in the west. In the western side, there are some roads that are used during drag races, but not in other races. 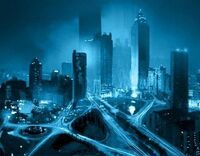 This is also a commonly seen area in Underground Mode along with Chinatown. The eastern part features only one two-lane road through a park.

There is an long unpaved alley way that leads to an unconnected bridge.

Chinatown is located next to the Market District with very similar features. It includes shops as well as other buildings, a construction site and other housing complexes. Chinatown is the smallest district in Olympic City. It has one main road which connects north to a draw bridge over a lake and eventually to the Inner City area.

There is also a second housing district located near Chinatown. It is a small neighbourhood with a few houses. There is also a large freeway in the west running near the spillway and past the city stadium, which runs to this area. There is also Highway 1, which is not shown on the main map, and is only accessible during one drag race.

Port Royal and Atlantica are located in the western parts of Olympic City, with Port Royal being mainly made up of industrial areas. It is mostly located across the spillway, and it features many heavy industrial factory complexes.

It also has the city prison, a subway line, the Bedard Bridge, John Newton Tunnel and the Port. Atlantica is the area near the coast east of the spillway, which mostly features hotels and other buildings.

The airport is located amongst a large construction area near the Market District. It is the second smallest region of all and consists of a large amount of construction work including a few roads leading to the airport.

There is a small park south of the airport with a skate park. There is also a large highway that is under construction, but is not accessible.