It has identical specifications to the coupé and was manufactured in a limited run of five units in 2009.

The racer and "NFS Edition" vehicles are unlocked upon the player earning a total of 906,250 racer bounty.

Both cars perform equally to their closed top counterparts. The Zonda Cinque Roadster is not available as an SCPD unit.

The Cinque Roadster has a performance rating of A 2070 and has its handling rated at 4.71. Top speed is 224 mph (360 km/h). With a price tag of $860,000, the Roadster is significantly cheaper than the Lamborghini Reventón Police, another Need for Speed VIP gift for players who have played Need for Speed: Hot Pursuit (2010).

The Cinque Roadster is a light car with outstanding handling and braking capabilities. Players can compete with most cars within its range effectively. 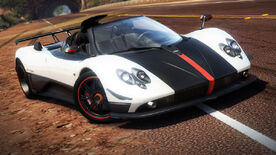 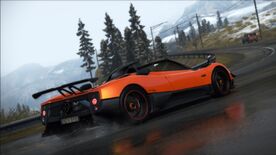 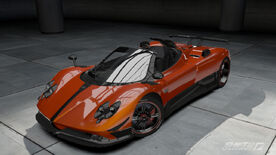 Retrieved from "https://nfs.fandom.com/wiki/Pagani_Zonda_Cinque_Roadster?oldid=142116"
Community content is available under CC-BY-SA unless otherwise noted.