There are two models of the State Muscle Cruiser; the standard issue model fitted with a full police package and the unmarked model.

The vehicle is a standard patrol unit used by state troopers. The unit is light but resilient resulting in an persistent means of pursuit against high durability vehicles. The power, mixed with torque produced by the engine, can become too excessive at low speeds and result in very little grip.

Troopers driving State Cruiser units are trained in the following advanced driving techniques: Box, Herd, PIT, and Roadblock. An excessively damaged or disabled unit adds a $2,500 Bounty to the rap sheet of the suspect.

The State Muscle Cruiser is a police unit in the PC, PlayStation 3, and Xbox 360 releases of Need for Speed: Undercover. It is utilised by the Tri-City Bay Police Department and engages in a pursuit at condition 3, also known as Heat Level 3.

The State Muscle Cruiser can be unlocked as a bonus car in Need for Speed: Undercover by entering 'qfmytyda' at the secret code screen.

It can only be used in Quick Race and multiplayer events.

The State Muscle Cruiser appears in Need for Speed: World as a police vehicle, and is utilised by the Palmont Police Department as a heat level 3 response vehicle. 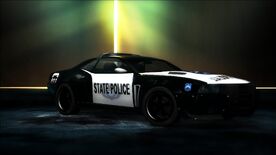 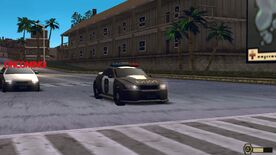 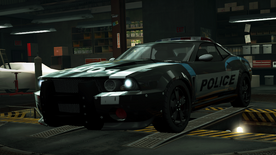 Need for Speed: World
Retrieved from "https://nfs.fandom.com/wiki/Police_State_Muscle_Cruiser?oldid=134988"
Community content is available under CC-BY-SA unless otherwise noted.