Need for Speed Wiki
Register
Don't have an account?
Sign In
Advertisement
in: Vehicles, 2010s, Fictional,
and 8 more

There are two models of the State Muscle Cruiser; the undercover model fitted with a full police package as well as a black body colour and the standard State Cruiser.

The vehicle is a advanced tactical unit used by experienced state troopers with advanced vehicle training. It is moderately heavy and resilient resulting in an persistent means of pursuit against excessively high durability vehicles.

The high power and torque created by the vehicle's engine is matched by the tyres fitted, resulting in an extremely effective pursuit vehicle.

The State Tactical Cruiser appears in Need for Speed: World as a police vehicle, and is utilised by the Palmont Police Department as a heat level 4 response vehicle. 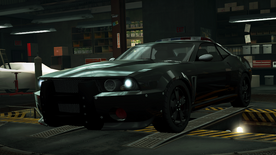