Need for Speed Wiki
Register
Don't have an account?
Sign In
Advertisement
in: Vehicles, 2000s, Fictional,
and 7 more

For the police van featured in Need for Speed (2015), see Chevrolet Express.

The Police Van is a law enforcement vehicle that is utilised by the Tri-City Bay Police Department (TCBPD) to carry a high number of passengers.

The Police Van appears in the Driver Job mission "The Fugitive" for the PlayStation 2 and Nintendo Wii releases of Need for Speed: Undercover, where the player must wreck the van and rescue their associate. 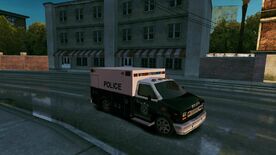