The Pontiac Firebird Formula is a pony car produced by Pontiac between 1970 and 1981. During 1977 and 1978, the Firebird was built with rectangular headlights. At that time, the 6.6L V8 was the most powerful engine option for the car. In 1979, a new nose design was implemented.

The Firebird is not strongly influenced by heavy steering but does feel stiff in slow corners.

Its acceleration is among the best in C class and better than that of both Plymouths, although its nitrous power appears to be lacking compared to the Chevrolet Chevelle SS. It can hit a top speed of 135 mph (218 km/h).

The Firebird Formula appears in Need for Speed: The Run as a tier 1 vehicle, and is unlocked upon beating one Autolog recommendation.

Due to its 0 to 60 mph time, the Firebird is the fastest accelerating tier 1 car. With a "very difficult" handling rating, its steering is reminiscent of other muscle cars in the game. Its top speed is easily outmatched by newer tier 1 cars from the 1980s and 2000s.

The NFS Edition is a tier 4 car and is unlocked after beating 15 Multiplayer Group Objectives. It is customised with a body kit and painted in black. On the side skirts, a orange stripe can be seen.

Its engine produces 708 bhp @ 6,200 rpm. Top speed is 189 mph (304 km/h). The accelerati is similar to that of the Dodge Challenger R/T "NFS Edition". Because of its soft suspension, the NFS Edition is prone to oversteer, hence the "very difficult" handling rating.

The Hobo signature edition is a tier 5 car that is unlocked after achieving a bronze medal in every Industrial Run challenge.

he paint job of the Hobo is inspired by beater cars. It will be rewarded to the player once they have achieved a

The Pontiac Firebird Formula appears in Need for Speed: Edge. 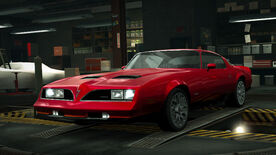 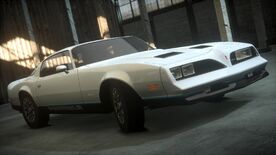 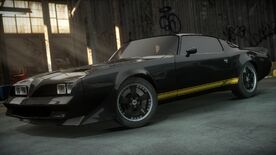 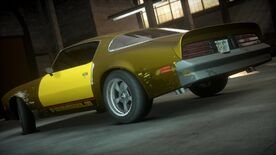 Need for Speed: The Run
(Hobo) 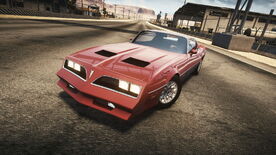 Need for Speed: Edge
Retrieved from "https://nfs.fandom.com/wiki/Pontiac_Firebird_Formula?oldid=132412"
Community content is available under CC-BY-SA unless otherwise noted.