Unlike previous generations, it was based on the Australian 2001 to 2005 produced Holden Monaro. In 2005, the Pontiac GTO received a revised exterior and the updated LS2 V8 engine.

The Pontiac GTO appears in Need for Speed: Underground 2. It is unlocked during stage 4 of the career mode and will be available to the player upon completing URL race 13.

Out of all Stage 4 cars, the Pontiac GTO has the quickest standard 0 to 60 mph time. It is thereby one of the most effective cars in terms of acceleration. However, the GTO is prone to oversteer in corners.

The performance traits of the Pontiac GTO make it an unfitting car for Street X and twisty Circuit Races, however, its weaknesses can be improved by Fine-tuning. Other than that, the GTO is suitable for Drag and high speed tracks.

The Pontiac GTO appears in Need for Speed: Underground Rivals and is purchasable for $46,000. 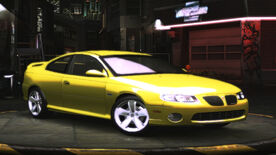 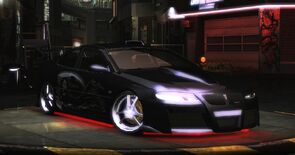 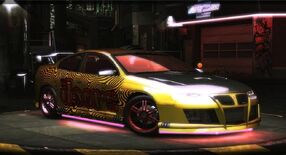 Need for Speed: Underground 2
(The Doors) 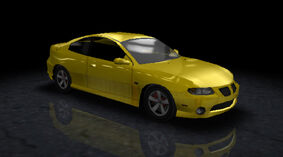 Retrieved from "https://nfs.fandom.com/wiki/Pontiac_GTO_(2004)?oldid=140719"
Community content is available under CC-BY-SA unless otherwise noted.