1305 kg (2877 lbs)
Stub - Why not help by expanding this article with relevant information.
The Pontiac Solstice is a roadster sports car manufactured by Pontiac between 2005 and 2009.

The Solstice utilized the GM Kappa platform which was shared by its General Motors counterparts such as the Saturn Sky and the Opel GT.

The Solstice can be obtained in Need for Speed Carbon: Own the City's career mode and is fully customisable. It is unlocked once the player defeats Striker, the leader of the Berserkers.

It has well-rounded performance in all categories although it cannot compete with the more powerful vehicles unlocked in the later stages of the career mode.

The Solstice appears in the PSP release of Need for Speed: Undercover. It can be bought for $27,000. 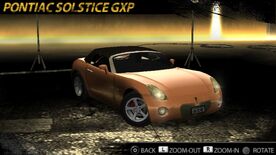