The 550 A Spyder appears in Need for Speed: Porsche Unleashed as a Race class vehicle in the Classic Era category. It is rewarded to the player upon winning the Classic Era bonus race and is purchasable in the car dealer for $50,000.

The racing-tuned 1.5L engine produces great power for its displacement, and combined with its extremely lightweight chassis and body, the car has an excellent power-to-weight ratio, capable of achieving better acceleration and top-speed than more powerful cars developed much later, including but not limited to, factory-spec first generation 911s of 1965 - 67. The major problem is that the 550A tends to understeer at high speed.

Although qualified as a Race class car, this vintage racing machine cannot really stand toe-to-toe with a fully upgraded 911 of the classic era.

Slick and rain tyres cannot be purchased for the 550 A. 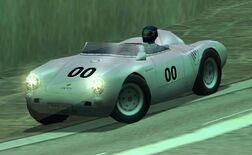 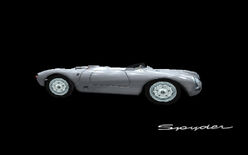