Need for Speed Wiki
Register
Don't have an account?
Sign In
Advertisement
in: Vehicles, 2000s, Porsche,
and 12 more

The GT3 utilises a 3.6L flat-six engine, which was previously found in the race versions of the Porsche 996. It was also sold as a homologation model for the GT2 class, which is known as the Porsche 911 GT3 RS.

The GT3 uses similar driving traits to that of the GT3 RS. It is an excellent Grip car and useful in Speed, although it somewhat lacks in terms of top speed. 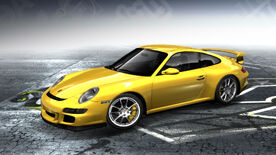