Need for Speed Wiki
Register
Don't have an account?
Sign In
Advertisement
in: Vehicles, 2010s, Porsche,
and 19 more

7-speed Automatic
1,540 kg (3,395 lbs)
Stub - Why not help by expanding this article with relevant information.

The production number is a reference to the Porsche 356 Speedster, which was also sold with a similar body style. Both cars are notable for having a short windscreen and a soft top.

The 911 Speedster appears in Need for Speed: Hot Pursuit (2010) as a Super Series racer vehicle, and as an SCPD Rapid Deployment unit as part of the Porsche Unleashed pack for PlayStation 3 and Xbox 360 releases.

It is capable of reaching 190 mph (306 km/h) top speed without nitrous and 210 mph (337 km/h) if it is used, and it can only be applied with a Pure Blue body paint colour. The Porsche Unleashed Pack also features a Gauntlet event called 'Barnstormer', which can only be played with the 911 Speedster.

It has sluggish acceleration, which makes it difficult to reach top speed. Its nitrous boost is decent, and handling is acceptable, along with its durability, but it is best used on long straights where nitrous can be utilised to accelerate faster.

The 911 Speedster appears in Need for Speed: Hot Pursuit Remastered as a car tier 3 vehicle available to cops and racers.

The 911 Speedster Interceptor is an SCPD Rapid Deployment unit unlocked by earning a pass in "Marked Man".

The 911 Speedster is a Super Series racer unlocked by earning a bronze in "Barnstormer". 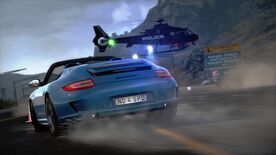 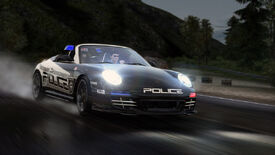