Need for Speed Wiki
Register
Don't have an account?
Sign In
Advertisement
in: Vehicles, 2010s, Porsche,
and 16 more

Like the previous Porsche 911 Targa models, it is noticeable for its retractable glass roof. The 997 Targa was the first in the Targa lineup to be sold exclusively with an all-wheel drivetrain.

The Targa 4S appears in Need for Speed: Hot Pursuit (2010) as a Performance Series racer vehicle, and as a SCPD Highway Patrol unit.

It is one of the best performing cars in its category. It possesses above average handling, acceleration, and top speed although it can lose in a straight line to cars like the Shelby GT500. It also features reliable durability which makes it a solid choice in Hot Pursuit events.

The Targa 4S appears in Need for Speed: Hot Pursuit Remastered as a car tier 2 vehicle available to cops and racers.

The Targa 4S is a Performance Series racer unlocked upon earning 255,000 racer bounty. 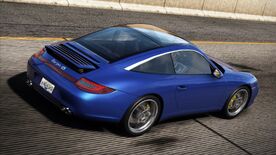 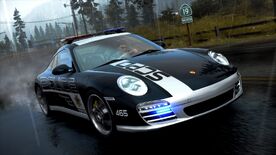