It was introduced by Porsche in 2004, a year before the introduction of the 997 generation. The power output was increased by fitting K24 turbochargers, new intercoolers, a higher manifold pressure of 0.9 bar, new catalytic converters, and exhaust tips.

The Porsche 911 Turbo S in Need for Speed: Most Wanted is unlocked after defeating the fifth Blacklist racer - Webster, and is purchasable for $105,000.

The Turbo S is a heavy car with an AWD configuration. It can accelerate quickly and reach an impressive top speed, but suffers from understeer in corners.

In pursuits, the Turbo S can ram police vehicles and other obstacles effectively. In races however, it may be outperformed by cars with better handling.

It is therefore best used in race tracks with few corners. To minimise its understeering problem, players are recommended to fine-tune its steering and other aspects, which have an influence on the handling.

The Porsche 911 Turbo S can be found in the game files of Need for Speed: Carbon. The model is fully customisable with the exception of some Autosculpt parts or refined performance.

It has four body kits although they all have missing elements including headlights and an interior mesh, however, the stock body kit is made up of a single sphere mesh for the purpose of testing and refining car shader materials.

The entire car body mesh is made up of a single sphere. 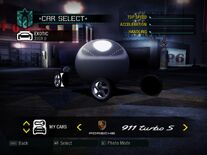 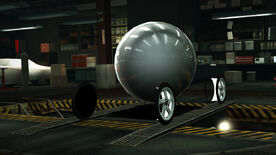 Retrieved from "https://nfs.fandom.com/wiki/Porsche_911_Turbo_S_(996)?oldid=140797"
Community content is available under CC-BY-SA unless otherwise noted.