898 kg (1980 lbs)
The Porsche 914/4 is a mid-engined roadster designed, manufactured, and marketed by Porsche in collaboration with Volkswagen. Porsche was still a design and development subsidiary of Volkswagen in the late 1960s.

The model was initially put forward by Porsche as a replacement for the 912 model and Volkswagen wanting to replace their Type 14 model. It was to be Porsche's last vehicle project under the Volkswagen contract.

It was originally planned to be fitted with a flat-four under the Volkswagen badge and a flat-six under the Porsche brand. This was altered for the North American market to have both engines fitted under the Porsche badge to avoid direct competition between the manufacturers.

The 1970 914/4 appears in Need for Speed: Porsche Unleashed as a Class 3 vehicle in the Golden Era category.

The low top speed of the car offers players an easy cornering experience but can oversteer under excessive force. The low performance capabilities of the 914/4 means it isn't very competitive compared to the range of cars featured in the title.

In the PlayStation release, the 914 1.7 appears as a Class 3 car in the Classic Era. 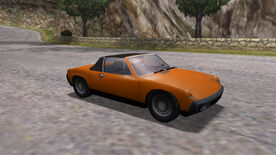 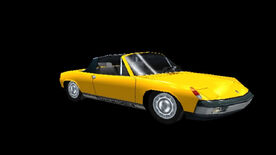