Need for Speed Wiki
Register
Don't have an account?
Sign In
Advertisement
in: Vehicles, 1970s, Porsche,
and 13 more
English

The K stands for "Kurzheck", which means "short". It was made popular by its immense power and speed, as well as a starring role in the movie Le Mans starring Steve McQueen.

The 917K appears in the PlayStation release of Need for Speed: Porsche Unleashed as a Race Class vehicle in the Golden Era category, costing 200,000 credits.

It is a replacement for the Porsche 935/78 Coupe "Moby Dick" featured in the PC release.

The high power and low weight makes the 917K extremely competitive against all other Porsches, including the Race class category vehicles. 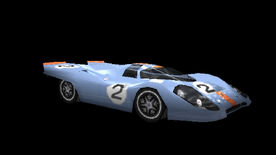