Need for Speed Wiki
Register
Don't have an account?
Sign In
Advertisement
in: Vehicles, 2010s, Porsche,
and 11 more

The Weissach Package reduces the vehicle's weight over the base specification by 41 kg through the use of magnesium wheels, reduced cabin soundproofing and other means, resulting in decreasing the acceleration time of 0-60 mph by .2 seconds. The package is also distinguished by its additional rear canards.

A 918 Spyder fitted with the Weissach Package achieved a lap time of 6 minutes and 57 seconds around the Nürburgring, becoming the first series production vehicle to beat the 7 minute marker, reducing the previous record by 14 seconds.

Approximately a quarter of the 918 produced units of the 918 Spyder are fitted with the optional Weissach Package.

The 918 Spyder (fitted with the Weissach Package) appears in Need for Speed: Most Wanted (2012) as part of the downloadable Terminal Velocity Pack for the PC, PlayStation 3, and Xbox 360 releases.

The 918 is an Exotic class vehicle that is unlocked in single player after shutting down the Most Wanted 918 Spyder. It is unlocked in multiplayer upon the player completing 24 SpeedList events in Everyday class cars.

The 918 is noticeably faster than its concept sister in multiple ways. Acceleration is far more potent and is on par with cars like the Koenigsegg Agera R and Lamborghini Aventador, while its top speed is improved from the old version. However, the car still struggles off-road, with one of the worst capabilities in the game. It is also vulnerable to being taken down, due to below-average durability. 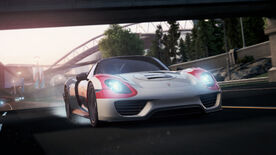