1080 kg (2381 lbs)
Stub - Why not help by expanding this article with relevant information.
The Porsche 924 was the entry-level Porsche model from 1976 to 1988, which was developed in conjunction with Volkswagen.

It began a revolution for Porsche by introducing a front-mounted, water-cooled four cylinder engine, and a rear-mounted gearbox.

The changes were aimed to achieve a goal of perfect handling. In addition, the introduction of the 924 gave Porsche a larger brand audience with the entry level car.

The Porsche 924 appears in the PlayStation release of Need for Speed: Porsche Unleashed as a Golden Era Class 3 car.

It has average stats, however, it is superseded by the higher trim models that improve on most characteristics. 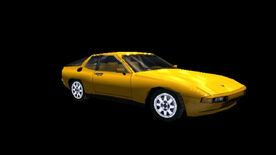