1179 kg (2599 lbs)
Stub - Why not help by expanding this article with relevant information.
The Porsche 924 Carrera GT was built by Porsche as the homologation model for Porsche's 1980 Group 4 Le Mans entry.

Based on the Porsche 924 Turbo, it features wider front and rear wings and a bonnet scoop for the intercooler.

The 924 Carrera GT appears in the PlayStation release of Need for Speed: Porsche Unleashed in the Golden Era as a Class 2 car. It has a higher top speed and acceleration rating than the 924 Turbo. 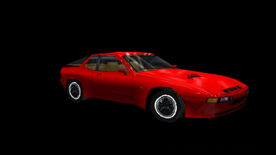