Need for Speed Wiki
Register
Don't have an account?
Sign In
Advertisement
in: Vehicles, 1980s, Porsche,
and 12 more

Porsche added a KKK K26 Turbo along with minor visual changes such as a NACA bonnet duct, rear spoiler, vents in the nose, and upgraded brakes.

The 924 Turbo appears in the PlayStation release of Need for Speed: Porsche Unleashed as a Golden Era Class 3 car. It has a higher top speed and acceleration rating than that of the original 924. 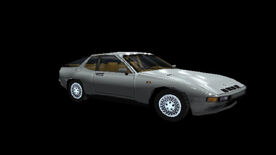