1450 kg (3197 lbs)
Stub - Why not help by expanding this article with relevant information.

The Porsche 928 was suppose to be successor to Porsche's flagship car: the 911.

Porsche began work on the 928 in the early 1970's and changed to a front-engine rear-drive setup. To keep the weight balance near 50/50, the gearbox was mounted between the rear wheels.

Production continued until 1982 where the Porsche 928 S replaced the model range with the upgraded engine.

The 928 appears in the PlayStation release of Need for Speed: Porsche Unleashed in the Class 1 of the Golden Era category. It has very quick acceleration as well as a moderate top speed and handling. 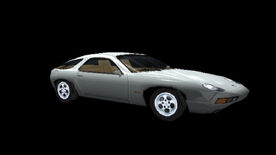