It is based on the Porsche 930 but has an extensively modified exterior and a water-cooled twin turbocharged flat-six engine. It was also the final evolution of the Porsche 935.

The 935/78 Coupe "Moby Dick" appears in the PC release of Need for Speed: Porsche Unleashed as a Race class vehicle in the Golden Era. It is rewarded upon winning the Porsche 935 Challenge and is available for purchase for $450,000 from 1989 to 1993.

It is the fastest car in the Golden Era, as it boasts the most powerful engine in-game, and it steers very well. Its greatest drawback is its outdated 4-speed transmission, which lacks the precision to allow the engine to stay in its optimal powerband and is essential for delicate cornering.

The "Moby Dick" is absent in the PlayStation release, in which the Porsche 917K is in its place as the Golden Era race car. 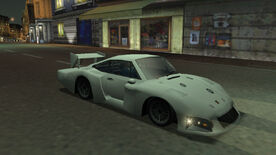