Need for Speed Wiki
Register
Don't have an account?
Sign In
Advertisement
in: Vehicles, 1990s, Porsche,
and 13 more

5-speed Manual
1,397 kg (3,080 lbs)
Stub - Why not help by expanding this article with relevant information.
Splitup - This article should be split up into multiple articles.

The 1991 Porsche 944 Turbo is the turbocharged and intercooled model of the Porsche 944.

Porsche made the Turbo the first car to use a ceramic port liner and produce identical power with or without a catalytic converter. Visually, it boasted 16 inch wheels, an altered rear spoiler, different front and rear bumpers, and a lower rear skirt.

The 944 Turbo appears in Need for Speed: Porsche Unleashed, having a higher top speed and quicker acceleration over the base model.

The 1991 cabriolet variant is featured as a Class 3 Modern Era car in the PC release, and can be acquired as used in Evolution upon beating the Class 3 Trophy.

In the PlayStation release, it is featured as a Class 2 Golden Era car, and can be acquired in Evolution as new for 103,725 CR.

The 1990 coupé variant appears in the PlayStation release, and is featured as a Class 2 Golden Era car. It can be acquired in Evolution as new for 102,800 CR.

A yellow Porsche 944 Turbo coupé appears in the illegal street race at the beginning of Need for Speed. 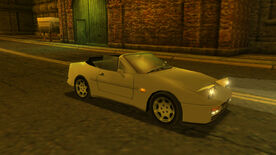 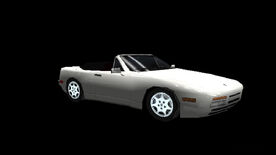 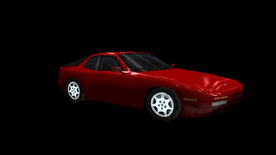 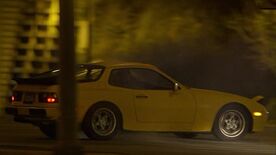