The Porsche 944 Turbo S appears in the PC release of Need for Speed: Porsche Unleashed as a Class 2 vehicle in the Golden Era category.

Due to its neutral handling, courtesy of a rear-mounted transmission and a front-engine, the 944 is significantly easier to control than the faster but tail-happier 911 Turbo with similar characteristics.

The 944 Turbo S and the Turbo Cabriolet have a low top speed in the game due to mistakenly sharing their final drive ratio with the slower naturally-aspirated 944. 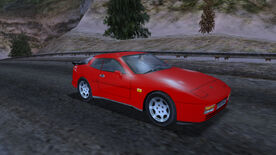