1320 kg (2910 lbs)
Stub - Why not help by expanding this article with relevant information.
The Porsche 968 CS or Club Sport is Porsche's lightweight version of the Porsche 968.

Many luxury-oriented equipment such as power windows, air-conditioning, an upgraded stereo and sunroof were optional extras instead of being standard equipment like on the regular 968.

The Porsche 968 CS appears in the PlayStation release of Need for Speed: Porsche Unleashed as a class 3 car for 102,000 Credits. It is an overall improvement over the base 968. 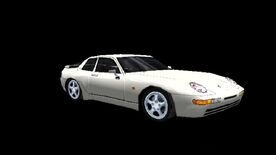