Need for Speed Wiki
Register
Don't have an account?
Sign In
Advertisement
in: Vehicles, Cars, Porsche,
and 12 more
English

The main difference is the NACA bonnet ducts, adjustable rear wing, and deeper front spoiler. Only 16 were ever produced and sold in Europe.

The Porsche 968 Turbo S appears in the PlayStation release of Need for Speed: Porsche Unleashed as a class 1 car for 175,000 Credits.

The Turbo S has a higher acceleration and top speed than the other 968 models, but at the sacrifice of handling. 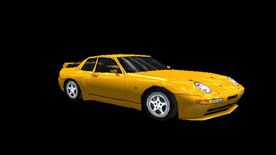