It weighs only 2,811 lbs (1,275 kg), making it one of the lightest cars made by Porsche. This was achieved by leaving out luxury equipment such as an air conditioner and radio.

The Boxster Spyder was available with a 6-speed manual or Porsche's 7-speed PDK dual-clutch automatic transmission.

The Boxster Spyder was made available in Need for Speed: World on May 7, 2012 as a tier 2 car, was the first open-top car to be released for the game. Since August 22, 2012, it has been featured as a B class car.

It was included as a gift in a Need for Speed: World giveaway, which was part of Electronic Arts' Summer Countdown on June 18, 2012. The car was redeemable with a free code. During the end of July 2012, the Spyder was featured as a gift again, but for newly registered users on GameSpot, whom allocated 15000 free codes.

It is capable of reaching a top speed of 189 mph (305 kmh) without nitrous. It also has precise handling, thanks to its low weight, and has a seven gear transmission. It can be upgraded to S class by installing Pro or Ultra series upgrades.

However, the car automatically shifts into seventh gear after reaching approximately 143mph (230km/h). This can drastically reduce its acceleration and therefore make it difficult to keep up with faster cars on straight roads. The Boxster Spyder has a weak nitrous boost too.

The Boxster Spyder appears in Need for Speed: Hot Pursuit (2010) as a Sports Series racer vehicle.

The racer vehicle is unlocked at the beginning of the player's career.

The Spyder is possibly the best performing car in the Sports Series along with the BMW Z4 sDrive35is and Subaru Impreza WRX STI, but doesn't take corners slowly like the Dodge Charger SRT-8 or accelerate faster than the Mazda RX-8. 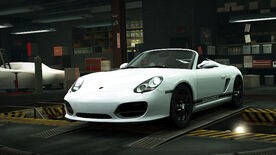 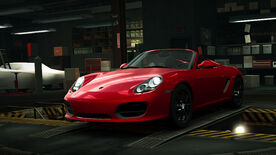 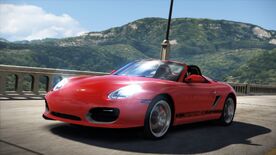