Need for Speed Wiki
Register
Don't have an account?
Sign In
Advertisement
in: Vehicles, Cars, Porsche,
and 27 more

The 2005 Porsche Cayman S is a mid-engined sports car manufactured by Porsche until 2009.

The Cayman S is the coupe version of the Porsche Boxster S and is fitted like its open-top counterpart with a 3.4L flat-six engine. Since 2009, the Cayman can be purchased with a slightly different exterior and a more powerful engine.

The Porsche Cayman S appears in Need for Speed: Most Wanted and can be purchased for $60,000 in the career mode.

The tenth Blacklist racer, Baron, who drives a black Cayman S with flame vinyls, must be defeated by the player to unlock it for purchase. Baron's car can be obtained as a reward card pink slip.

The mid-engined layout of the Cayman S allows it to enter corners without having to brake a lot unlike heavier cars such as the Pontiac GTO (2005). Thanks to this, the Cayman S is one of the best handling cars in the game. It also delivers enough power on the road and is capable of a high top speed, once upgraded with Ultimate performance parts.

Despite having somewhat less power than later unlocked cars like the Porsche Carrera GT, players can use it effectively until the end of the career mode.

The Cayman S appears in Need for Speed: Carbon as a tier 2 exotic class car.

It has precise steering and a high top speed.

The stock Cayman S is unlocked for purchase in the Career mode depending on the player's chosen career path:

Once unlocked, it can be purchased from any Car Lot for 75,000 cash.

Colin drives a Cayman S as part of the crew in the Career mode, if the player drives a tier 2 car.

Sal drives a Cayman S as part of the crew in the exotic career path of the Career mode, if the player drives a tier 2 car.

The Porsche Cayman S appears in Need for Speed: ProStreet as a tier 3 car. It is unlocked after dominating the Showdown: Chicago raceday in the career mode. The price tag of the Cayman S is $48,000.

It has great handling, and performs well in Grip, but may lack in Speed Challenge as its top speed can be surpassed by the Porsche 911 Turbo (997) as well as other cars with a better stock performance.

Drags are also suitable for the car if it is upgraded with level 3 parts. It can be good for drift races although it cannot get a good score like other cars.

The car also oversteers easily whilst cornering due to its mid-engined, rear-wheel-drive layout.

The Porsche Cayman appears as part of the Collector's Edition upgrade for the PlayStation 3 and Xbox 360 releases of Need for Speed: Undercover.

Any car dealership within Tri-City Bay offers the Cayman S for free, but appears in the PlayStation 2 and Nintendo Wii releases with a price tag of $43,000.

It performs averagely, but still uses its praised handling. Its stock top speed of 206 mph (332 kmh) is the second highest among Tier 2 although it also comes at the cost of acceleration. If the player applies performance parts, the Cayman S will gain a small boost in acceleration but also a decreased top speed.

The Porsche Cayman S appears in Need for Speed: Shift as a tier 2 car

Since its engine is placed between the rear and front axles, the Cayman S has a subtle handling, which makes fast cornering possible. Its 3.2L flat-six engine doesn't produce acceleration times that are as good as cars with a higher power output but is still capable of high top speeds.

The Porsche Cayman S appears in Need for Speed: Nitro as a Class B car. It is rated 3 in speed, handling, and drifting; and 2 in both acceleration and strength.

Jawad, the top racer in Dubai, drives a Cayman S in all the location's Silver Cup race events except for the Drift Challenge, Time Attack, and Speed Trap events. Unlike his Roadster and Reventón, his Cayman S is outfitted with a custom body kit.

Jawad's Cayman S can be unlocked as a collectable car for use in both Arcade Mode and Career Mode, once all stars are obtained in all Dubai Silver Cup events.

The Porsche Cayman S was made available in Need for Speed: World during the Taiwan restricted test session on October 14, 2009 as a tier 2 car. Since August 22, 2012, it has been featured as a D class vehicle.

The handling of the car suffers from heavy steering because of a heavy mass. Its nitrous also has a poor strength. Braking is often required to enter difficult corners properly and prevents the car from keeping up with nimbler cars. These traits are compensated by a quick acceleration, that is comparable with that of C class cars and a high top speed of 151 mph (243 kmh).

The Cayman S is best used in pursuit events. It is less recommended for multiplayer races, although it could race well in race tracks designed for quick accelerating cars.

The Shift style is an NFS Classic that costs

2600. It was released on August 16, 2011, and is the first car released capable of displaying Treasure Hunt gems on the map.

If the player swaps the engine with the 3.6L flat-six engine from the Porsche 911 GT2 (997), the Cayman S gets a high increase of power. Different to some cars, it won't lose grip and its brakes can cope with the power.

The Cayman S appears in Need for Speed: Edge. 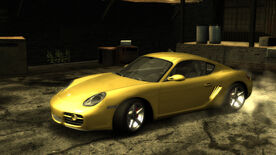 Need for Speed: Most Wanted
(Demo)

Need for Speed: Most Wanted
(Baron's) 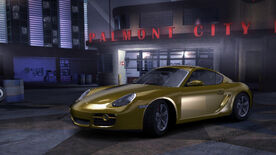 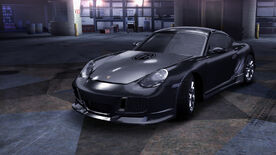 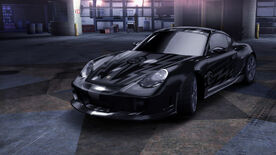 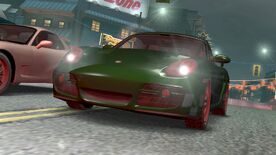 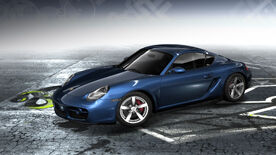 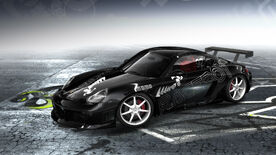 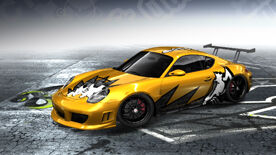 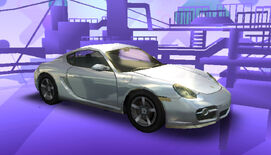 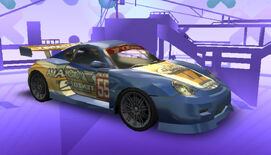 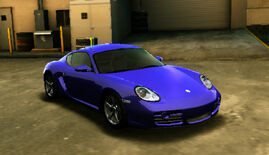 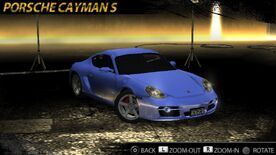 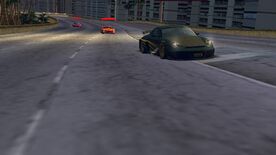 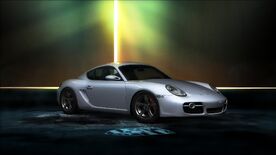 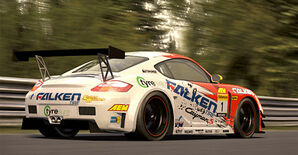 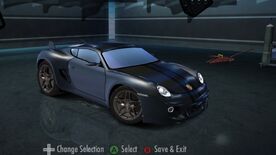 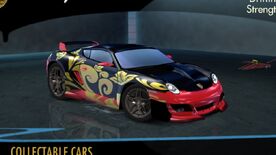 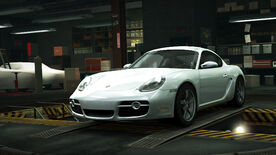 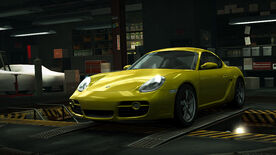 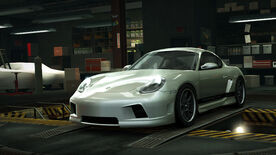 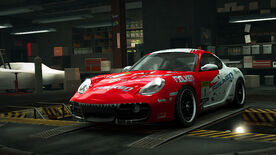 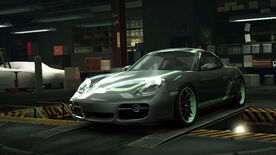 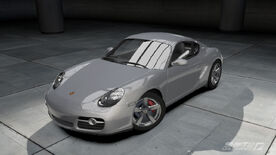 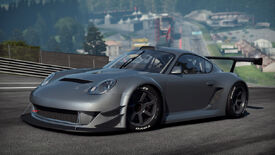 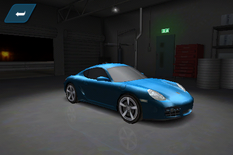 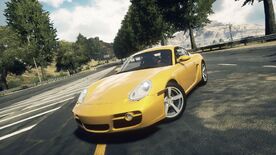